Disclaimer: I am not a pattern writer by trade and this pattern is free. This pattern has only been test knit by me and as the author, I have tunnel vision.
Update: 1/8/10 Thanks to Phrensy on Ravelry I have made some small corrections in the pattern.

The cat starts off knit in the round, from the bottom up. The intarsia portion is knit back and forth and leaves an opening in the back for stuffing. The top of the head and ears finish up the cat and are knit in the round. 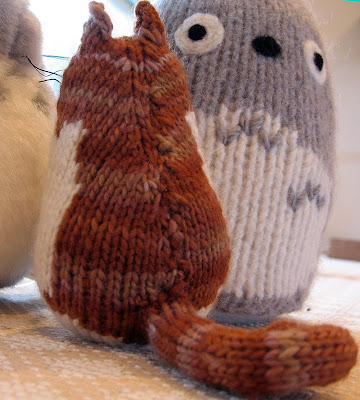 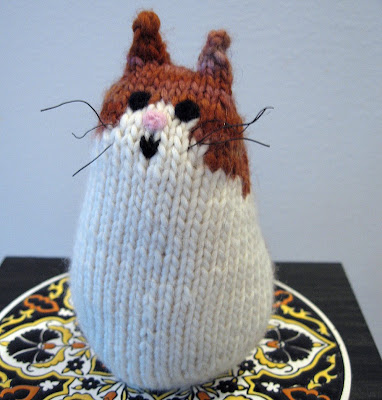 Yarn: Brown is Malabrigo worsted for his back and chunky in white for his chest. Using different gauges changes his looks. Reverse the sizing if you want a cat with more color and a smaller white chest.
Needles: Size 5 dpns, set of 4 or 5. I knit on the tight side. Uses a needle a couple of sizes smaller then stated for the yarn, so the stuffing doesn't show through.
Gauge: really doesn't matter.
Materials to finish: 6-7 inch circle of fabric for weight beads. Stuffing of choice. I like wool roving or corn stuffing. Fiberfill makes a much softer cat, which is nice, too.
Techniques: Intarsia, Knitting in the Round, Kitchener. I knit from the same ball using both ends for my intarsia. I only go nuts for a short time, kind of like raising kids:)

Inc.1 is the same as a M1. Pick up strand between stitches with left needle front to back and knit through the back. (I've attempted to replace all the inc.1 with M1 in this first revision)

Finishing: Sew in yarn tails around ears, close up any holes. Knot on the inside and use tails to stuff ears, or add stuffing. A small tweezers is helpful. Tighten up holes on the intarsia portion and knot or sew in ends on the inside. Join yarn at top of opening and sew opening closed about 1/3 of the way. Stuff head firmly.
To add weight so the cat stands up better, cut a circle of fabric 6-8 inches in diameter. Gather up the edge with a running stitch and strong thread. Add polyester beads or sand. I stay away from organic matter because bugs get into it here in the tropics. Stuff the bag into the bottom of the cat and add more stuffing around and on top if the bag. Finish sewing shut. Set cat on the table and shape it the way you want and then arrange the tail the way you want it before sewing it down. 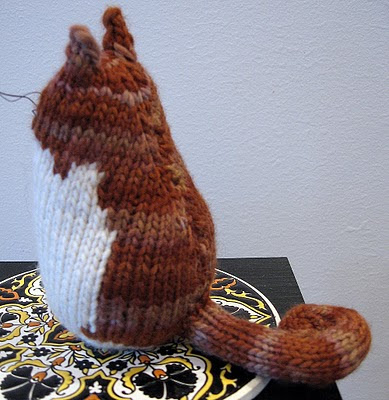 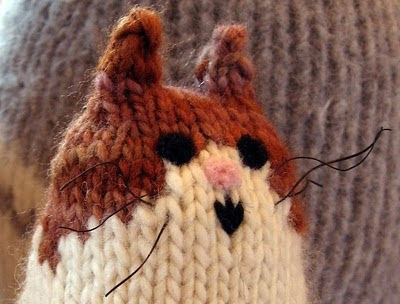 This is George in Beaverslide Natural grey and white, aran weight. He came out bigger.

Here is my attempt at a graph. Please note that it starts on Row3. The black colored boxes on the right side are the middle back stitch. On his head, they represent the stitches to be Kitchenered. The other colored boxes represent decreases or increases. The red boxes at the top are the last body row before the ears begin. 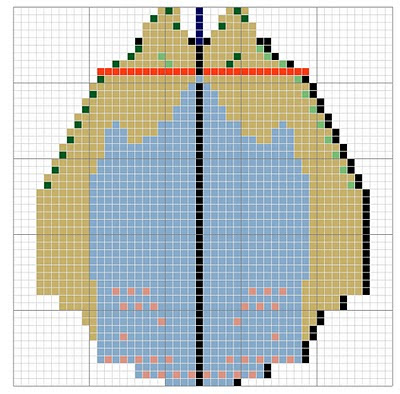 On George, I purled Row 3 for the end of his base.

More color or spots can be added by coloring in areas on the graph where you want the color. A single color can be used and the cat then can be entirely knit in the round. Just remember to stuff as you go:)
Posted by Acornbud at 9:07 AM

How did you know what my cat looked like? Very, very cute.

This cat is just perfect!!!Thank you for sharing the pattern!

I don't usually think "I must cast on NOW" when I see a project, but I need a whole clowder of these. Thank you so much for sharing!

This is a cute cat. Love the pattern. Can´t wait to knit it.

They are totally CUTE! Thanks for sharing your pattern notes. I'll have to try a gray one to match our kitty.

Very cute kitty, thanks for sharing the pattern!

How completely adorable!
Thank you for sharing.

Oh so adorable!! I think this is just the thing that my Momma-who-has-everything needs for a Christmas gift!! Thank you!!

very cute kitty - i love the tail and sweet face!

Oh my goodness! That is adorable, I just have to make myself one, at least! Thank you so much for sharing!

OMG that is about 17 different kinds of awesome! Thanks for the pattern!

Barb the kitty is just too amazing! I can't wait to show it to Mini-Me - she'll want one and it will be a good excuse to do a bit of fun knitting!

Nice! I can't wait to see it in person.

Fantastic, I think that I must try this! Thank you for sharing it!

OMG, someone still reads my blog! haha I LOVE this pattern...I'm going to have to make a couple for the twins! :-) Happy New Year!!!

This will be a fantastic gift for my niece! thank you very much.

Oh my gosh... ho da kewt!!! But I've never done stranded knitting before and I'm scared I'll mess it up!

Thanks for the pattern. Very cute!

Woo girl, yes you are a pattern writter. Good job and cute cat.

chocolatetrudi blogged about your pattern - and it's SO CUTE !!! Enough to make me do colourwork which I hate :]

I just posted pics of my finished cat. Such a cute pattern. I want to make dozens of these and fill a window sill with them.

Hmm, not all cats are two coloured. I reckon I could whip up a few solid cats, in the round, too. (Goes off to check yarn stash.)

OMG - this is absolutely the cutest knitted cat I've ever seen (& I hope the Intarsia craziness using yarn from both ends of a ball doesn't last as long as the kid craziness).

How cute is that!! Thanks for sharing the pattern with us... love love love!

This is just the sweetest little thing since jelly beans were invented - I love it!

Thank you for sharing the pattern, I can't wait to make one to cuddle.

Holy cuteville! Thanks for sharing the pattern -- I'm looking forward to knitting one up.

I'll HAVE to knit one of these for my sister, which means another one for my Aunt! Thank-you for sharing your pattern.

The totoro doll in the background of one of the pictures is so cute. Do you happen to have pattern for it or know where to find one?

Thanks for the comments! Blogger hides most email addresses otherwise I would thank you personally:)
CrystaIN-there isn't one for that particular Totoro, but Ravelry has a couple, and the Totoro TP topper can be adapted.

I love it! I haven't made a knitted critter in about four years (A mouse in a tutu) and have been suddenly feeling crafty-itchy the last few days... hence pottering on Google for ideas.

I was looking for teas cosies, but who wants a tea cosy when you can have a cat!? ;-)

Thanks, Kathy. Message me on Etsy, http://www.etsy.com/shop/Acornbud regarding your request.

Your cat is really cute! Thanks for sharing your pattern!

I love this kitty - just purrrrrfect :) I'm new to knitting, but I would really like to make this. Thank you so much for the pattern!

This is such a fab pattern! Thanks so much for posting it up :)

Thank you so much, I MUST knit this puss to keep my 6 live in cats company (plus the two babies).
Adorable xxxxx

The best looking one I've found in my search! Can't wait to begin!

I agree: The best looking one I've found in my search! Can't wait to begin!

To be honest: I am going to try to convert this knit pattern into a crochet pattern, if that is allowed.

this is adorable!
I added this pattern and your other free ones to the directory at www.knittingatplay.com

they will go live on the 23rd and 24th! I hope they bring you lots of traffic

We have over 13,000 free patterns avaialble, when you design another please feel free to submit it on our page and I'll add it as well

it looks like cat from pbs peg + cat but he needs to be purply blue and lavender.

What is the finished size of this cat?

Thank you, thank you. Very sweet cat. Thanks for sharing with us.